Ravi Shankar has passed at 92:

First, Brubeck, now this. Apparently, with less overdoses than usual this year, the musical grim reaper is working his way back from 100-year-olds. Chico Hamilton better make sure his insurance is paid up.

Shankar is dead… Or is he? Could it be that, like the other monsters of the 20th century, Charlie Yardbird, Duke, Hank, or Jimi, his music was so much bigger than he was, that death is just the point where the potion broke free from the glass?

Admit it, hippies: Shankar’s ragas can be a rough ride for western ears. It can be punishing for many, even great, musicians, just to try to follow it: Jim Keltner, maybe the greatest drummer on earth, said that keeping time to Ravi’s music was like trying to eat soup with a razor blade. But thankfully, Shankar made some mammoth recordings later in his life for the Private Music label. Many of these, while no less exotic, at least worked in melodies and time that were sympathetic to rock and jazz fanboys. That made it a lot easier for blue–eyed jerks like me and you to see what kind of high-level composer and player Shankar really was.

Here’s my fave, made with Philip Glass, “Prashanti”: http://www.youtube.com/watch?v=3mjQqNZ6te0 which I believe means “peaceful”. Could be wrong about that.

When I found myself in India a few years back, my captors allowed me time to visit one record store. The place was like a Shankar franchise. A giant poster of The Master hung behind the counter, and there seemed to be only three kinds of CDs, all in equal measure: Bollywood Hits Of The Minute, Shankar’s Ragas, and Ragas Played By People Who Wish They Were Shankar Even To The Point Of Changing Their Last  Names (or first names, I couldn’t really tell) To ‘Shankar’. Apparently, some do that even if they are good enough not to have to. For us, it would be as if Dion and Brian Wilson had decided they would be more successful if they changed their first names to ‘Elvis’. 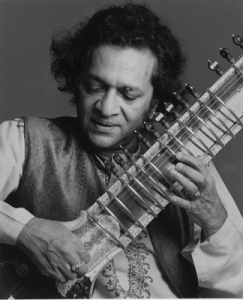 How you play this thing by yourself is beyond Mr. Stick – You might as well ask me to run the Super Collider

At the time, obviously swimming in the local groove, and growing sick of the Indian pop blare on the car radio, I wanted more of Shankar’s sitar music than the Private stuff offered, but I had no idea where to start. The guy behind the counter saw me and my Hawaiian shirt coming from two streets down. He tossed me the appetizer Chants of India, the Ravi album produced by George Harrison. With George’s name prominently on the cover, It has to be Shankar’s best seller. But I bet most US/UK Beatle-obsessive owners, after they realize there is no Indian version of “Something” on the album, never played it much (you know the old joke: You ever notice how your roommate’s copy of The Concert For Bangla Desh was never scratched on side one?). I wasn’t much different, I suppose. It isn’t that traditional Indian music isn’t gorgeous, especially after so many 60s records introduced it to us as a dessert topping – It’s that it’s hard to absorb into memory, and difficult to differentiate, one piece from the next. It takes time, and who the hell has any of that?

And in short doses, we were only really able to let sitar music be a novelty, anyway. It’s a sad, embarrassing crime that Shankar’s music (he being the only brand name sitar player known to the west) will forever be associated with paisley shirts from 40+ years back, late-model Eric Burdon hits, and Austin Powers.

But whenever I get a chance to watch the Monterey Pop movie, which, to say nothing of including Shankar at all, amazingly puts him on last, after Hendrix and everybody else, I always stick it out to the end. Even if the notes are shooting by so fast it sounds like an adding machine on too much voltage, there’s still something compelling and enjoyable about every second of it. Maybe because you could see him tearing it up. I mean, great musicianship is NOT the sole decider of great music, you know that, right? But you got to give it up for the hot shots sometimes, and Damn, Sam, this guy could could wail. You didn’t have to understand the music to know that.

So the Great Ravi has left his body. You may be surprised to hear this, but my knowledge of Hindu spiritualism is somewhat foreshortened. I don’t know if his passing means his talent now gets transmuted into somebody else’s hands or not.

If anybody knows the answer to that, keep it to yourself. Maybe that way, we can be surprised when the next new guy shows up, and tears the roof off the joint.

Maybe, as was written in London and New York alleyways about Bird before him, “Shankar Lives!”

Note from G: Don’t ask me where El Sticko has been for 8 months, or why this particular serving of sad news awakened him when others didn’t. I can’t speak for him, he can’t answer for himself, and if he could, he wouldn’t answer to you, bub.